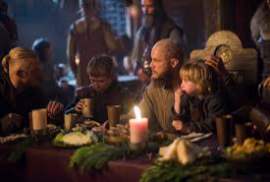 History Channel drama script chronicles the adventures of a Viking warrior (and alleged descendant of Odin), Ragnar Lothbrok. Want to know what’s going West, Ragnar planning a rebellion against the long tradition of the East attacks. Originally intended as a mini-series, the Vikings have been renewed for a second season and third.